Practical network-wide packet behavior Identifying the network-wide forwarding behaviors of a packet is essential for many network management applications.projects on Practical Network-Wider Including verification of rules, enforcement of policies, detection of attacks, traffic engineering and location of faults.Current tools that can perform identification of packet behavior either incur significant time and memory costs or do not support updates in real time.

Network-wide packet behavior identification is a control plane function that discovers the actual forwarding behaviors of the packets in a flow (or a set of flows) including their forwarding paths, where they stop or drop, and which boxes they traverse, by analyzing the network state in the data plane. In the following situations, packet behavior identification is necessary for SDN management.

We propose AP Classifier for the identification of network-wide packet behavior that many important application network management can use. We design algorithms for building the AP Tree for a network to rapidly classify a packet into an atomic predicate.

In addition, it uses only a few MBs of memory in Practical Network-Wide Packet Behavior Identification by AP Classifier. It can be updated in real time and is robust when the data plane changes dynamically. 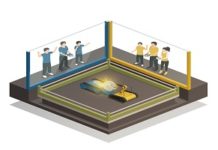 Evaluation of Quality of Water Supply of Belgaum City – A...